Winners of Deaf Sport Personality of the Year 2010

SPORTS PERSONALITY OF THE YEAR 2010

BBC’s Sport Personality of the Year has been staged since 1954 with a very popular audience but it seemed way past time we should also recognise achievements within the Deaf Community so a decision was made to take on this challenge and to host an exclusive event with the support of big sports fans as part of the committee to hold this special night in November 2010 at Wembley Stadium in London.
The organisers explained: “As we are aware that there may be plenty of discussions of Deaf Sporting achievements socially at deaf pubs, clubs or amongst friends but no official recognition has ever been given to exceptional achievements across Great Britain or United Kingdom. E.g. At Summer Deaflympics events Great Britain may have achieved some amazing results but with lack of official recognition which is a shame.

So this is our opportunity to encourage our athletes/organisers/coaches and motivate them with praise from the public on a special night.”

Voted for a person, this prestigious award will be given to the participating sportsman or woman whose actions have most captured our imaginations during 2009/2010. Gain a vote ie Working hard, making a commitment, a good personality, individual achievement and greatest impression.

Currently the World Deaf Squash Champion he also won the Surrey Closed Championship (hearing) in January 2010. He also plays professionally on the men’s tour around the world and has a respectable world ranking of 250. 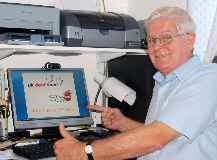 This award recognises those who selflessly devote their time and efforts to enabling others to play and enjoy sport.

Derek Simmons:- His heart has always been in trying to ensure that all Deaf people are treated equally and with the respect they deserve within sport.