Deaf Parents on ‘The Guardian’

Charlie Swinbourne and his partner are deaf. Their two children have full hearing but signing has bought them all closer together 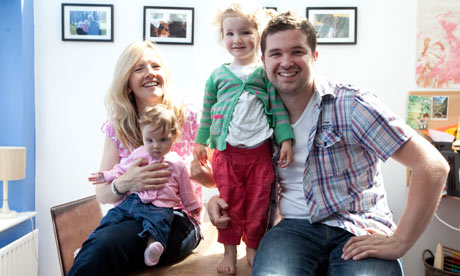 Charlie Swinbourne with his partner, Jo, and their daughters Edie, six months, and Martha, two. Photograph: Frank Baron for the Guardian

One day last summer, I was playing hide and seek in the park with Martha, my 18-month-old daughter and hid behind a tree. Wondering where I was, she turned to Jo, her mother, and asked, “Where’s Daddy?” With Jo’s reply – “Daddy’s behind the tree” – Martha found me and ran, giggling into my arms. A typical family scene, you might think, except that Jo was 30 metres away, and they communicated without making a sound, in sign language.

Nowadays, the idea of parents signing with their babies isn’t unusual – you only have to type the words “baby signing” into Google to see just how popular the classes have become. However, for us, signing wasn’t something we needed to be taught – because Jo and I are deaf.

We both wear hearing aids, and with amplification I can just about use the phone, while Jo is a little more deaf and can’t (as a result, I get to book all the doctor’s appointments). We both have immediate family members who are deaf – Jo’s sister, and my parents and two brothers – so there was a possibility that Martha might be born deaf too. But this didn’t worry us – deaf culture and sign language is part of our identity – something we feel positive about.

On the day Martha was born, we turned down the newborn hearing test, preferring to enjoy her as a baby before discovering how much she could hear. We soon found out, when we indulged the noisy deaf habits we’d never had to question before. She woke every time we flushed the toilet at night, watched television with the volume turned up, or trampled clumsily across our floorboards. Her six-week hearing test confirmed it: she was hearing – or deaf-impaired, as some of our deaf friends like to describe it. Once we knew for sure, we stepped up our efforts to talk and sing to her (poor thing: we’re tone deaf as well).

Although she could hear, we were determined to sign with her too. As soon as Martha held our gaze, we signed basic words – “nappy”, “milk” and “sleep”. At 10 months old, she responded for the first time. During her evening bath, as Jo signed “duck” (signed by opening and closing your hand like a duck’s beak), Martha’s hand responded with a virtuoso quack of her own. Within a few weeks, she was signing “duck” all the way up the stairs to the bathroom.

Soon, she learned more words – “light”, “octopus” (another bathroom toy), and, most important, “Mummy”. She loved signing her favourite person’s name so much that I had to reassure our childminder that Martha periodically tapping the side of her head with the palm of her hand wasn’t a physical tic, but simply how “Mummy” is signed. At 15 months old, she began to say “Mmmm” each time she made the sign, and before long, “Mummy” became her first spoken word.

Like a mini superhero, Martha gained new powers as she added to her repertoire. With the sign “again” she could ask us to read The Very Hungry Caterpillar for the sixth time in a row. Consequently, Eric Carle’s classic story of a caterpillar becoming a butterfly by way of extreme gluttony is now burned into my memory for life. Meanwhile, with the word “more” Martha could demand second helpings of yogurt, grapes and milk – and snow. One day, I carried her out into the garden to show her thick snowflakes falling from the sky. “More!” she signed, insistently. I didn’t have the heart to tell her there was a limit to my powers.

Signing also taught her new concepts. A few months later, I was standing at the supermarket checkout with a trolley full of food, when Martha started excitedly banging her fist against her chest, as if imitating Tarzan. I had to explain to the bemused elderly man next to me in the queue that she was signing “mine” – which was her way of claiming ownership of the chocolate buttons I’d placed on the conveyor belt. She didn’t stop there – she went on to claim that our house, car and even my socks were all “mine”.

We also used signs to help Martha identify relatives and friends – through sign names – which are a common feature of the deaf world. For example, when she says “Grandad” Martha puts a hand to her ear, because he once gave her a toy phone. For “Nanny” her hands track the outline of her grandmother’s necklaces. And for her friend “Cate” she taps her cheek with her forefinger – as if giving herself Cate’s dimples.

Communicating visually also taught Martha how to adapt to our deafness. If we don’t hear her call us, she’ll tap us on the shoulder (which occasionally becomes a game of tag) or wave her hand. Signing has also encouraged her to maintain eye contact, which became more important as her speech developed, because both Jo and I lip read to help us understand what she is saying.

Now nearly two and a half, Martha still signs but speech has become her primary form of communication. Where once she signed to herself as she sat in her pram – drawing inquisitive stares from bus passengers all over London – she is now more likely to try to give them orders in a language they can understand. The six-month window when Martha was too young to speak, but old enough to learn sign language, is a stage we’re now looking forward to experiencing again. Our second daughter, Edie, was born in November, and Martha has christened her with her own sign name – tapping her ear every time she says it (our guess is that she thinks Edie sounds a bit like “ear”).

Edie is as sound-sensitive as Martha, so we’re continuing to tiptoe across our floorboards, leave the toilet unflushed (at night, at least) and watch television quietly. We can’t wait to see her discover language by creating shapes in the air with her tiny hands and fingers, just as her sister did.